Saint Ambrose Catholic Community is committed to serving those in need with a compassionate heart. Our Mental Health Ministry (MHM) works together to offer support, education and a network of resources for individuals and families dealing with mental health challenges. We aim to be a learning community that will increase our knowledge and understanding of mental illness and how best to respond with the care and compassion of Christ.

Many people are suffering and struggling, often silently. They need help…mostly…they need HOPE.

How we can CARE:
• learn how to ask the right/tough questions
• understand warning signs
• know what to look for among family and friends
• learn how to get help for those we love

May is Mental Health Awareness Month

We’ve teamed up with Dr. Edgardo Padin-Rivera and Dr. Dobie Moser to bring you a series of 4 videos sponsored by the Saint Ambrose Mental Health Ministry.

2. Adolescents and Mental Health
Filled with many challenges and opportunities, adolescence is the most crucial time for mental health development as teens go through major changes that set a course for their adulthood.

3. Serious Mental Illness
Requires professional intervention and support for the person with the illness and for their families and caregivers.

4. Mental Health: from Helplessness to Hopefulness
Many of us never imagined that mental illness and challenges would be part of our story. Yet, it happens all the time and we need to know how to live with hope as we work through life’s challenges.

For deaf or hard of hearing.

The Lifeline provides 24/7, free and confidential support for people in distress, prevention and crisis resources for you or your loved ones, and best practices for professionals.

Do you need help?

You are not alone. We are here to help.

Support for Individuals and Families

Build a Network of Resources

Additionally, the ADAMH Board works to reduce the stigma of mental health and addiction concerns through collaboration, prevention, education and advocacy efforts.

Read about what the ADAMH is doing:

Under the leadership of Mr. Titterington, the Medina County Alcohol, Drug Addiction and Mental Health Board (ADAMH) has invested in a wide and diverse array of services and programming. Besides partnering with the Medina County Health Department to create the Opiate Task Force, the ADAMH Board has collaborated with numerous other entities.

The ADAMH Board pledges to continue to work hard for Medina County and invest in services that benefit citizens of all ages.

We can all help prevent suicide. The Lifeline provides 24/7, free and confidential support for people in distress, prevention and crisis resources for you or your loved ones, and best practices for professionals.

Mental Health America is a wonderful website to educate yourself on signs and symptoms of mental illness, facts, statistics and the latest news on mental health. www.mhanational.org

When we think about cancer, heart disease, or diabetes, we don’t wait years to treat them. We start before Stage4–we begin with prevention. So why don’t we do the same for individuals who are dealing with mental health concerns?

We believe that mental health conditions should be treated long before they reach the most critical points in the disease process, and we’re committed to addressing mental health B4Stage4.

Navigating the mental health system is complicated, frustrating, and confusing. Double board certified psychiatrist Dr. Dom explains the differences between the vast array of mental health professionals, including psychologists, psychiatrists, Certified Peer Specialists, social workers, Licensed Marriage and Family Therapists, and more. You’ll understand which mental health professional is right for you or your loved one and how to find the best specialist in their field.

Freshmen Guide to the College Transition

How to Combat Homesickness, Loneliness & Anxiety During Your First Year

Leaving home for college can stressful for first-year college students. Feelings of depression, isolation, homesickness and loneliness are quite common among freshman. Research shows that as many as 75 percent of college freshman reported feelings of loneliness their first two weeks of school. Loneliness can lead to depression, which can hinder a student’s chance to excel in the classroom. The guide below looks at mental health during freshman year and provides insight and resources to help college first-timers better transition to university life.

ARTICLE: Parents hear ways they can help their children through tough teen years

BRUNSWICK, Ohio – What’s a parent to do? That question has been asked many times over the past week as the community tries to deal with the suicides of two high school students.

The evening of Jan. 21, several hundred people came to St. Ambrose Church to find some answers. Adults were invited into the main church while young people gathered in the chapel.

Kaitlyn Boblik, a 12-year-old middle school student said that she was trying to make sense of everything that had happened. “The second day back to school, we talked about it a lot,” she said. “We spent most of the time in choir talking about it. The day after, there was a morning announcement that if we needed to talk to someone there were counselors, the principal and vice principal we could talk to.”

She also said that an eighth grader had placed sticky notes on everyone’s locker with positive messages on them and she thought that was a great help.

Her mother, Kimberlee, is involved with the Brunswick Pride Foundation formed after the death of four students in an auto accident last year. “We’re blessed to have a community that comes together in times like these,” she said.

Rebecca Hufbach, 16, is a student at Hoban High School who belongs to an organization that lets young people talk through difficult issues. “I’m trying to find a way to help,” she said.

The Rev. Bob Stec, pastor of St. Ambrose said that it had been “a daunting week for the community,” but that it was important, as adults, to separate the issues involved and make sense of them and to give children tools to grieve and then make sure they are making healthy, good choices.”

Father Bob’s brother, David Stec, principal at Padua High School and a longtime counselor, talked about the importance of talking with children about how they’re feeling and assure them that the adults in their lives love and support them and are there for them.

“Unfortunately, there is no perfect training manual for parents. There’s no one source to help navigate the difficulties that kids face,” he said. While the emotions teens face are the same as those their parents faced, there’s so much more these students deal with.

“Put the pieces of the puzzle together,” he said. “Watch for the signs that your child is having difficulty. Tell them you love them and are there for them. Not just on birthdays or Christmas, but every day.”

He advised parents to talk to their children about their own experiences with the grieving process. This may be the first time in a child’s life he or she is feeling this emotion and they don’t know how to react. Grieving is normal, he said, but if your child was not close to the person who died and the grieving goes on for an extended length of time, seek help.

Noting it is much better to detect signs of depression early, he cautioned parents to monitor telephones and computers. “If you don’t know what’s on your child’s phone or computer, you don’t know your child,” Stec said. He said that unless you remove the phone from the child’s bedroom, there is no escape from the 24/7 onslaught. “If cyber bullying is going on, the child can’t just leave school and get away from it. It follows him wherever he goes.”

He told parents to watch for changes in mood. If teens are unhappy, it’s not unusual. But if that unhappiness continues for a long period of time and is severe and you see real change, “Get help,” he said. “Talk to your child even if they give you those one word answers.”

He said to ask open ended questions, ask about friends and activities in which they are involved. “And don’t be afraid to ask if that child has ever thought of hurting himself. If they say yes or they are talking about suicide or saying things like you’d be better off without them, take them to the emergency room right then. Don’t wait.”

Most times, it won’t be that big moment, however, he noted, but if a parent is vigilant and can step in early, it’s much easier than finding out late in the process. “Teens are unhappy,” he said, “they’re always comparing themselves to others – but not to the whole person, just to the best parts of those people. Remind them everyone is unique and point out the beautifulness or handsomeness of every kid. There are no uber-kids, but a lot of angst.

“Set good, strong, realistic goals – not too high that they can’t achieve them, but no so low they question their worth,” he said. “Most of all, just listen. If you see behavior changes, like detentions at school or drop in grades, increased swearing, lying, not coming home on time, isolating themselves from friends or changing friends … put the pieces of the puzzle together.”

Stec added, “Don’t be afraid to say you want to be sure they are not suicidal and that you are always there for them.” He added that you can also say that if they do something wrong, you will be mad at them, because you are the parent. But you love them more than you’ll be mad at them. Love your children, even though you may not always like them.”

He said the community, school and churches have trained people wanting and willing to help and to take advantage of those opportunities.

He suggested websites like helpguide.org and suicide prevention sites that have helpful suggestions. “Do your research,” he said.

Father Bob joined his brother, playfully punching him to bring home the point that when a child is in danger and hurting, parents need to step in and protect their children. 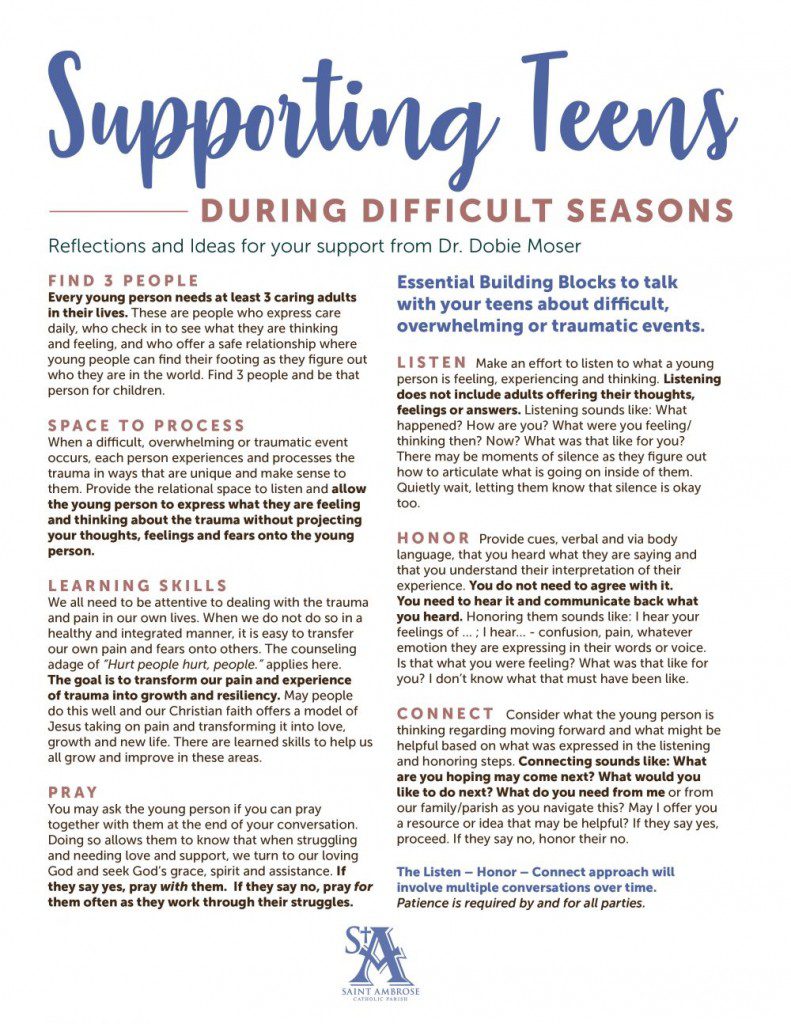